The Demand for Multilingual Workers is Growing

The Demand for Multilingual Workers is Growing

Amanda Carneiro, assistant manager of the Citizens Bank branch office in Framingham, speaks English, Spanish, and Portuguese. Carneiro confers with dozens of immigrants every week. Some area companies are accenting efforts to hire multilingual workers fluent in more than one language as they grapple with the challenges of dealing with customers from widely different cultures.

The corporate demand for multilingual workers with language skills other than English is driven by a variety of trends including the globalization of business and the growth of immigrant communities in states like Massachusetts, which gained more than 200,000 foreign-born residents between 1995 and 2000.

This phenomenon affects industries from high-tech and financial services to healthcare, retailing, and real estate.

These challenges will only increase, employment and language specialists say, as the number of foreign-born residents living in the United States continues to rise. For example, the US Census Bureau reports that the nation’s Hispanic population is expected to jump to 49.3 million from 38.2 million by 2015, with the Asian population expected to grow to 17.4 million from 11.6 million.

As a result, employers, executive recruiters, and outplacement counselors are combing through resumes, looking for individuals with foreign language capabilities. Companies and organizations are also selectively sending managers to language centers to brush up on their skills.

“We’re seeing more candidates who are fluent in different languages,” said Nancy Wilber, managing principal in the office of Right Management Consultants, an outplacement firm that also advises companies on human resources matters. “And that’s a key differentiator in getting new work.”

One client moving through the job-hunting process with the firm is Natalio Pincever of Fort Lauderdale, Fla., whose last job was vice president of Latin American technology at Citigroup. He said he is now considering two job options in the Northeast.

“Language skills make a difference, absolutely,” in being given serious consideration for a new managerial position, said Pincever, an Argentine whose first language is Spanish. He is also fluent in English and French, and speaks some Italian, Portuguese, and Hebrew.

Many multinational companies will only hire senior executives who have international business experience and “can speak another language and understand another culture,” said Robert Sullivan, who heads the Boston office of Korn/Ferry International, a large executive search firm. The firm, he said, recently recruited two executives who are well-schooled in Spanish for a Massachusetts technology company.

Some companies – banks and retail and supermarket chains, for instance – are finding that they have to do little to sign up multilingual workers, particularly in cities, who speak a language other than English.

Citizens Bank has managers and staff members who can speak one or more of 81 languages, ranging from Spanish to Russian and Korean, said Kathy Schoeffler, Citizen’s director of human resources for Massachusetts. The bank has 3,800 full- and part-time employees in the state.

“Our driving force is being able to communicate with customers of many different nationalities in the more than 150 communities in the state that we serve,” Schoeffler said.

Amanda Carneiro, a Brazilian, is assistant manager of Citizens’ branch office in Framingham. In addition to English, she speaks Spanish and Portuguese.

“Being able to speak two foreign languages enables me to help many new immigrants in the Framingham area,” said Carneiro, who confers with dozens of immigrants every week.

Retailers have also found it important to hire multilingual workers who speak a language other than English as they reach out to customers from the state’s immigrant communities. At Filene’s downtown store, 17 languages are spoken, from Arabic to Turkish, said Filene’s spokeswoman Robin Reibel.

“If a customer speaks a language other than English, the store’s general manager can refer to a directory to find an associate who can speak that particular language,” Reibel said.

Residential real estate firms are also on the front lines in serving a rapidly increasing, diverse clientele. Based on 2001 data, foreign-born households represented 8 percent of new home ownership nationally and 11 percent of existing home ownership, according to the JointCenterfor Housing Studies at HarvardUniversity.

Realty firms have to aggressively recruit agents who can speak different languages.

“Fortunately, we’ve been able to get 15 brokers who can speak various Chinese and Vietnamese dialects,” said Vin Moscardelli, owner of Central Real Estate in Quincy, where Asians make up more than 15 percent of the city’s population. More than 50 percent of the firm’s yearly sales are to Asians, Moscardelli said.

The International Council of the Massachusetts Association of Realtors, a Waltham-based trade group, is researching how many of its 18,500 members are fluent in more than one language.

Companies and institutions wanting employees to hone their foreign language skills frequently refer them to language centers such as HablEspana in . HablEspana conducts Spanish classes for employees at Fleet Bank and Massachusetts, among others, according to academic director Natalia Cepeda.

“We’re seeing more doctors as well as lawyers specializing in criminal and immigration cases,” she said.

Although Lahey relies on some staff members’ language fluency, it also frequently calls on specialty firms to provide translation services.

“Everybody here always wants patients to understand their rights” and what they’re being treated for, Robbio said.

Wherever they’re being provided services, newcomers to this country look forward to having their needs met “without a language barrier,” said Carneiro of Citizens.

How can Fluency Fast Corporate Spanish Classes save you money?

Fluency Fast starts by doing a deep dive into companies. We spend time on construction sites (while wearing hard hats, of course), in restaurant kitchens, with front office staff, on the plant floor and in the golf-ball company to find out what employees need to be able to say and understand to effectively and safely communicate. We also ask owners and employers what their goals are. We personalize our teaching to your business.

We then put that information into a vocabulary list, cross-reference it with the highest frequency words in Spanish and from that, create stories in context that we can teach and that can later be read and listened to.

The difference between what we do and what a standard CD or book provides is personalization to the particular needs of the company. Standard industry-specific books contain thousands of individual words. It is as effective as reading a dictionary in alphabetical order. The truth is, most employees don’t need to be fluent in the language. They just need to be able to communicate effectively and have a solid base of the most important phrases in Spanish. Our approach is also different because with our method, larger classes are better. Our optimal class size is 30-75, but we can present to as many as 200. 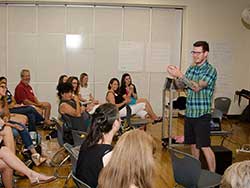 Are you ready to really learn a new language?

Join us online or in person for a Fluency Fast class, and see for yourself what a week of comprehension-based language learning can do for you!