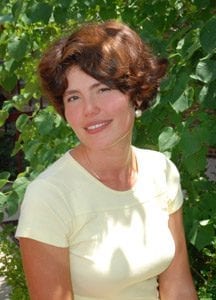 Katya has been called “the best teacher we have” by her colleagues who have taken multiple Fluency Fast classes. She is attentive to the needs and questions of her students and proceeds at a deliberately slow pace so that even the most dubious student is eventually amazed at his progress by the end of the class. She convincingly portrays the Russian alphabet as “not that hard.” Many of her students attempt to learn the Cyrillic alphabet, although it is optional in our beginning classes. Her students call her “amazing” and one confessed, “I didn’t really think I could learn a language as hard as Russian, but Katya was wonderful and, I can’t believe it, after 4 days I can speak Russian!”

Katya graduated from Kiev State University, Ukraine, with a degree in teaching Russian as a foreign language. Since then she has been teaching Russian to people of different ages and backgrounds. Her students have included diplomats from the United Nations and the International Monetary Fund, where she taught Russian for four years, as well as American high school and middle school students. It was during this teaching experience that she was introduced to Comprehension-Based Methods as a primary methodology. Her enthusiasm and skills yielded remarkable results. Every year her students would earn the greatest number of silver and gold medals in the National Olympiad of Spoken Russian. One of her students was a national finalist who won two months of study in Russia. For the last six years, Katya has also taught French through Comprehension-Based Methods. Her students performed outstandingly in the National French Contest. In 2005, 25 percent of her French students scored in the top 10 percent in the state of Connecticut.

Katya has been teaching Fluency Fast Russian classes since 2006. Click here to find out about upcoming classes she is teaching.